Ewan The Sheep has been on our radar for a while now. We have been using white noise and soothing sounds for the first few weeks during the night. These products occasionally work but don’t always have the desired effect. Ewan is said to be the best selling baby sleep aid, with great reviews, so it definitely has something to live up to.

There are two different versions you can buy, the Ewan Dream Sheep and the Deluxe version, of which we bought the Dream Sheep. The Deluxe version comes with a system called Cry Sensor which is supposed to detect if your baby has woken and starts making your chosen sound without having to press anything yourself.

We decided this wasn’t a feature that would be beneficial for us, as we only wanted to use this to help get Penelope to sleep initially, then if she is unsettled we can decide to use it again or not.

Other features include real womb noises, heartbeat sounds, white and pink noise as well as a comforting night light. A night light is also something we have struggled to get right. It’s either too dark or too bright so it will be interesting to see if the light can get it just right.

My first impressions are good. Ewan is soft with the sound unit hidden behind a velcro opening located underneath the sheep. It has two levels of sound and you can choose to use Ewan without the light. This will come in handy with saving battery when using in the day and also for those who have other night lights available.

There is a large variety of sounds that will come in useful to sooth your child and hopefully you can say goodbye to sleepless nights.

So far .. so good. And don’t forget your 3xAAA batteries.

This is a difficult product to review as each baby will have a different reaction to the sounds it makes and some babies will sleep better some nights than others. The first night using Ewan was a good one. Penelope slept well, woke up twice for feeds, and seemed to be soothed by the music.

It is a fairly large toy, so for a new born who doesn’t need it to hold and cuddle, it seems like something smaller would be more beneficial as there is limited space in some of the places she sleeps (i.e. her Sleepyhead). I will have to come back to this once Penny is older to see if she does actually use this for comfort by holding it.

The built in night light is good but not good enough to be your only source of light. It is useful to bring your baby a nice warm glow which they will be used to whilst in the womb so this adds another level of comfort for your baby.

Ewan has an effective and simple design. Soft and plenty of smaller parts for your baby to hold. It is operated with each to find buttons at the base of each leg and the red night light is a nice feature to add another level of comfort.

The tail of the sheep is velcro and can be used to hang from mobiles and any other place you could possibly want to have it which is helpful.

I will say that the size can be an issue when placing it anywhere else other than a cot.

So far Penny has been happy with the sounds that Ewan uses to sooth her. The range of different noises can be used in different situations and some are more subtle than others.

The noises available from Ewan are definitely what makes it better than other products available.

The price of Ewan was very reasonable. We managed to buy this unit from Amazon for £29.99. Some other sleep aids I found were cheaper but did not have the noises available that Ewan has.

The Deluxe version is currently £39.99 which includes the cry sensor. If this is something you think would be beneficial then I think having to pay and extra £10 isn’t a bad thing.

I would recommend this to other dads who are looking at sleeping aids. I would suggest trying white noise via your phone to see if that is something you baby likes. But the heart beat and womb noises available from Ewan are something that really make a difference to soothing your baby.

I will come back to this review and possibly add an edit after using it for a few weeks to see if my opinions change. But so far it seems to be holding up to it’s expectations. 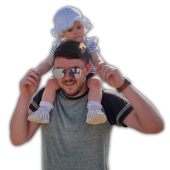 I am 30 years old from Manchester, England. A first-time dad to Penelope and partner of a very patient Shannan. We have lived together for over 2 years and we have never been happier to be parents! I am using our podcast and blog to share my experience of being a first time dad, in hope that at least one person who sees or hears, will realise that they aren’t the only one who doesn’t know what they are doing!

Welcome to the Verging on Stupid podcast & blog. Hosted by 2 new dads, who are teetering on the edge of being completely incompetent. We will be addressing the highs and lows of fatherhood which hopefully brings plenty of laughter, some realisations, and a hint of reassurance. Week by week we will be taking you on our journey as first times dads and discussing the things you need to know and probably some things you wish you didn’t.

Verging On Stupid: The Dad Podcast

Welcome to the Verging on Stupid podcast. Hosted by 2 new dad’s, who are teetering on the edge of being completely incompetent. We will be addressing the highs and lows of fatherhood which hopefully brings plenty of laughter, some realisations, and a hint of reassurance. Week by week we will be taking you on our journey as first times dads and discussing the things you need to know and probably some things you wish you didn’t.

We welcome the new year with a new season. Don’t be fooled though, nothing has changed, apart from our temper (that’s definitely shortened). In this episode we talk Christmas, upcoming episodes and the usual crap you should now be used to.